In 2014 the International Agency for Research on Cancer (IARC) listed processed meat as a group 1 carcinogen to humans. This means that there is sufficient evidence in humans to indicate a causal relationship between eating processed meat and developing cancer. Other Group 1 carcinogens included in this classification are tobacco smoking, solar radiation, and consuming alcoholic beverages.

An analysis of 10 studies estimated that each 50-gram portion of processed meat eaten daily increases the overall risk of developing colorectal cancer by roughly 18%, which is equal to one sausage link or two slices of bacon.

The statement that processed meat causes cancer seems stark, but in reality, the evidence for meat and cancer risk has been building, with the American Cancer Society recommending that we limit red and processed meats since 2002!

What counts as processed meat?

Processed meat is meat that has been processed to enhance its flavor or to increase its shelf life. This processing includes curing, salting, fermenting, or smoking. Examples include hot dogs (frankfurters), ham, sausages, corned beef, beef jerky, turkey bacon, and salami as well as canned meat and meat-based sauces.

How does processed meat cause cancer?

Processed meats are thought to cause cancer in a number of ways. Additives such as sodium nitrite are added to meat during processing, which helps to improve the color and shelf life of the meat. This nitrite can turn into cancer-causing nitrosamines when meat is cooked at high temperatures, such as when meats are grilled or fried. Another potentially cancer-causing group of compounds, Hetrocyclic Amines (HCAs), are also formed when meats are cooked at high temperatures, which may increase the risk further.

Smoked meats are thought to increase cancer risk as they are high in Polycyclic Aromatic Hydrocarbons (PAHs) which are formed when organic substances such as wood or meat burn. PAHs have been shown to cause cancer in animals and may contribute to increased cancer risk seen in human studies.

Despite our advancements in understanding how meat forms these different compounds during heating and cooking, it is not yet fully understood how cancer risk is increased by processed meat consumption.

What about ‘Natural’ processed meats?

To avoid adding traditional nitrates, some companies have turned to more natural ingredients such as beetroot or celery extract to preserve their products. These natural ingredients still contain nitrates, however, and so they can still form the nitrosamines which are thought to increase the risk of cancer. Similarly, products that claim to be ‘naturally’ smoked are still going to potentially contain the cancer-causing compounds created by any type of smoking, hence the cancer risk is still potentially the same.

There has also been increased interest in products such as turkey bacon, which consumers chose believing it to be a lower fat ‘healthy’ alternative to regular bacon. We can now see that in terms of cancer risk, turkey bacon would still cause issues given its processing.

So, I have to give up processed meat forever?

The American Institute of Cancer Research was unable to find a safe limit for processed meats, so their advice has been to avoid it completely. However, a more sustainable method is to reduce the amount you are eating. Eating ham three times per year is not going to have a huge impact on your risk of developing cancer but eating ham every day for lunch may have the potential to increase your risk of developing colorectal cancer.

For die-hard sandwich lovers, our Tempeh Avocado Sandwich is hearty and delicious.

Instead of having hot dogs at your barbecue, try our BBQ Pulled Carrot Sandwich.

If you’re craving something smokey, our Black Bean Chili is also a perfect substitute, thanks to the addition of chipotle pepper in adobo. 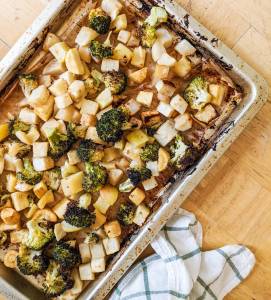